But as I was reviewing my photos yet again, I came upon one that was quite disturbing - a young sea lion that appears to be strangled by fishing line around its neck.  The line has obviously rubbed against the skin and is now cutting into the animal's flesh.

Here's the picture.  If you enlarge it (and you may not want to) you will see the gory detail. 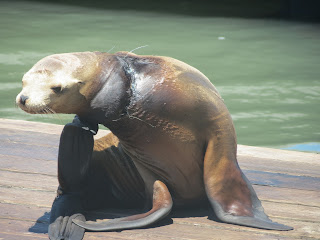 What to do?  The sea lion is in San Francisco and I'm in Michigan.  This is one of those times I really appreciate the internet (although I suppose a really good telephone operator could have helped me in the old days).

I thought "aquarium" and called the one on the Pier, with no answer.  Then I called the number for the naturalist at the Steinhart Aquarium, who gave me the number for The Marine Mammal Center at Pier 39.  They have a 24-hour line to report stranded sea lions, so I called that number and got a very nice woman immediately.

After she asked me to describe the animal and when I was at the pier, she said this particular animal had been spotted many months ago, but had been evading capture UNTIL two days ago!

The sea lion pup is now under a vet's care (nasty infection - which you can see in my photo).

I searched their site and found the story of the capture, with photos!

I sure hope he recovers!  And maybe spreading the news will remind people not to carelessly toss fishing line and other trash into the water where it can harm animals.
Posted by Scottie at 7:00 PM

RV and Other Travel